The relative economic value of vaccines against priority diseases depends on the burden of disease, vaccine cost, and the available resources for introducing the vaccines into National Immunization Programs. As burden of vaccine preventable disease and economic resources to support vaccines vary between and within countries, the decision to introduce these relatively more expensive, new vaccines requires that policy decisions are grounded in a robust body of evidence that reflects national conditions. Vaccine decision making has economic considerations as a central component.  To ensure that many new, life-saving vaccines reach the children who need them most, immunization needs to be viewed as an attractive investment so that additional financing can be found. A growing body of literature shows that the economic benefits of investing in health in general and vaccines in particular, greatly outweigh the costs. As such, commitments to GAVI and to immunization by governments, donors and the private sector will result in positive economic benefits to communities and societies worldwide.

We conducted a literature review of the economic benefits of vaccines and estimated the economic benefits of six childhood vaccines—malaria, measles, meningitis, pertussis, pneumonia, and rotavirus—during the decade by modeling the cost of illness and the value of statistical life. An analysis by Stack et al. suggested that scaling up these vaccines among 72 GAVI eligible countries could avert 6.4 million deaths, 428 million cases of illness, 63,000 disabilities from meningitis, $6.2 billion in treatment costs, and $145 billion in productivity losses. Moreover, the benefits from averting these deaths were estimated to be valued at $233 billion ($116-602 billion). 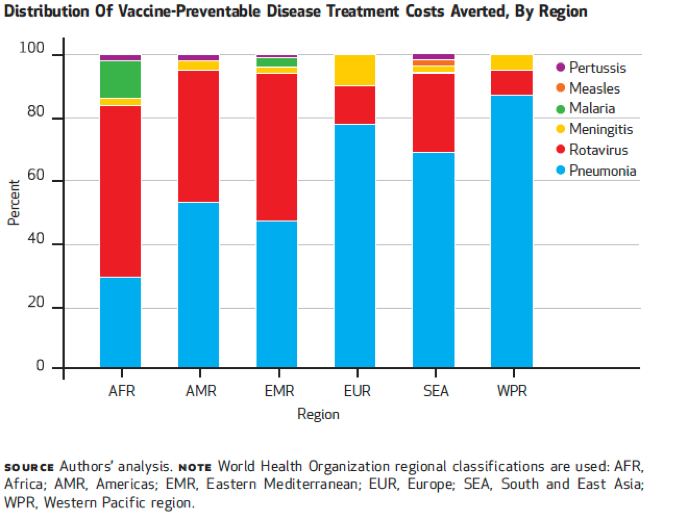 An analysis in Health Affairs using the Value of Statistical Life (VSL) approach estimated that the reduction in mortality by increasing vaccine coverage to 90% during the Decade of Vaccines in the 72 poorest countries in the world was worth $231 billion. This figure represents the value of reducing threats to human life, independent of an analysis of costs averted through reduced mortality and morbidity. This methodology is widely applied in other policy realms like environmental health, but this paper is the first to use it for valuing the benefits of investing in vaccines in developing countries. 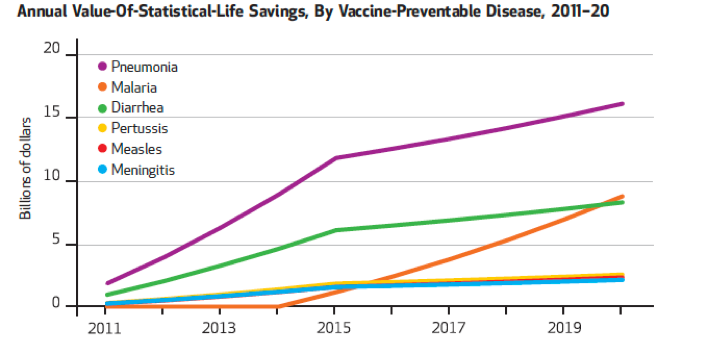 During The ‘Decade Of Vaccines,’ The Lives Of 6.4 Million Children Valued At $231 Billion Could Be Saved

Estimated Economic Benefits During The ‘Decade Of Vaccines’ Include Treatment Savings, Gains In Labor Productivity

Strategies For “The Global Decade Of Vaccines”