Both projects took a unique approach by bringing epidemiologists and vaccine clinical trialists together with experts in financing, strategic vaccine supply, policy, advocacy, and communications into a team with a single focus, nested within an academic institution and working closely with international agencies and leading research partners. PneumoADIP, the Hib Initiative, and later IVAC, found that putting a variety of skills together on the same problems allowed the creation of a learning space where complicated problems could be effectively addressed.

IVAC, founded in 2009, derives its integrated organizational structure from this approach. IVAC has expanded its scope and now provides global technical leadership on over 15 vaccine-preventable diseases and syndromes through eight practice areas.

Learn more about what we do.

Since 2003, the world has seen dramatic improvements in child health and survival

When Gavi, the Vaccine Alliance was started in 2000, nearly 10 million children died every year before the age of 5. While newer and powerful vaccines such as pneumococcal and Hib conjugate vaccines were saving lives in wealthy countries, children in developing countries – where people were at greatest risk for suffering, disability, and death – had no access. There were numerous reasons why—there was little obvious evidence of the toll of disease in these countries, global bodies did not yet have strong policy recommendations, and vaccines were too costly for countries to consider adding them to national immunization programs. 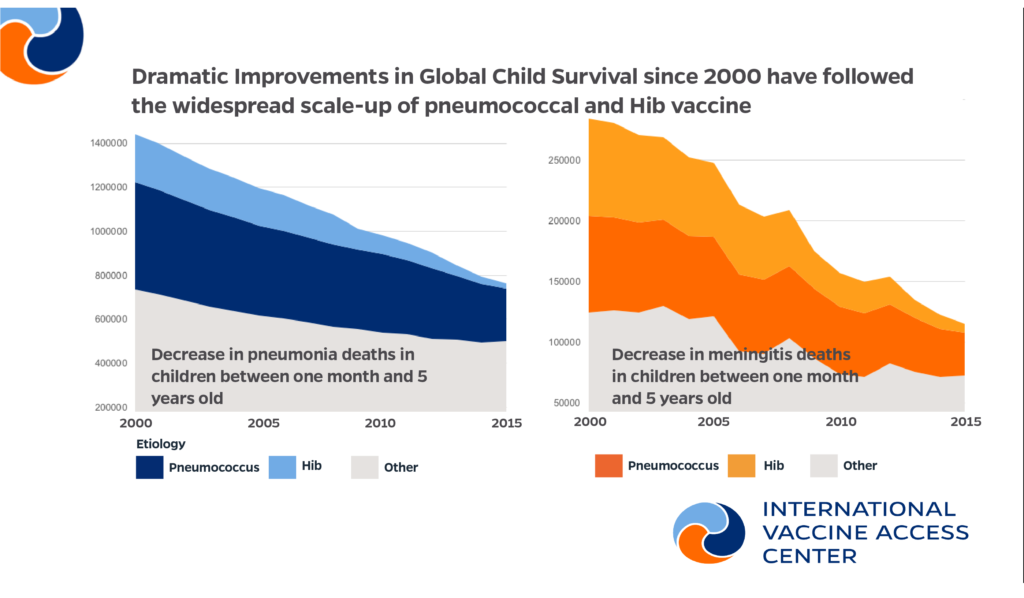 Working closely with global and national leaders, IVAC helped transform the status quo. Below are a few of the global immunization community’s milestones of which IVAC is proud to have been a part:

Historically it has taken 15-25 years for new vaccines to reach children in low-income countries. In April 2009, Rwanda became the first low-income country to introduce the pneumococcal conjugate vaccine into its routine schedule for children. Rwanda introduced the vaccine only nine years after it was initially licensed in the U.S. and only three years after universal introduction began in France, Germany, and the United Kingdom. At the ceremony in Kigali, families seeking vaccination for their children were joined by Rwandan health leaders like Dr. Agnes Binagwaho, Gavi’s then-CEO Julian Lob-Levyt, and IVAC’s founding director Dr. Orin Levine. 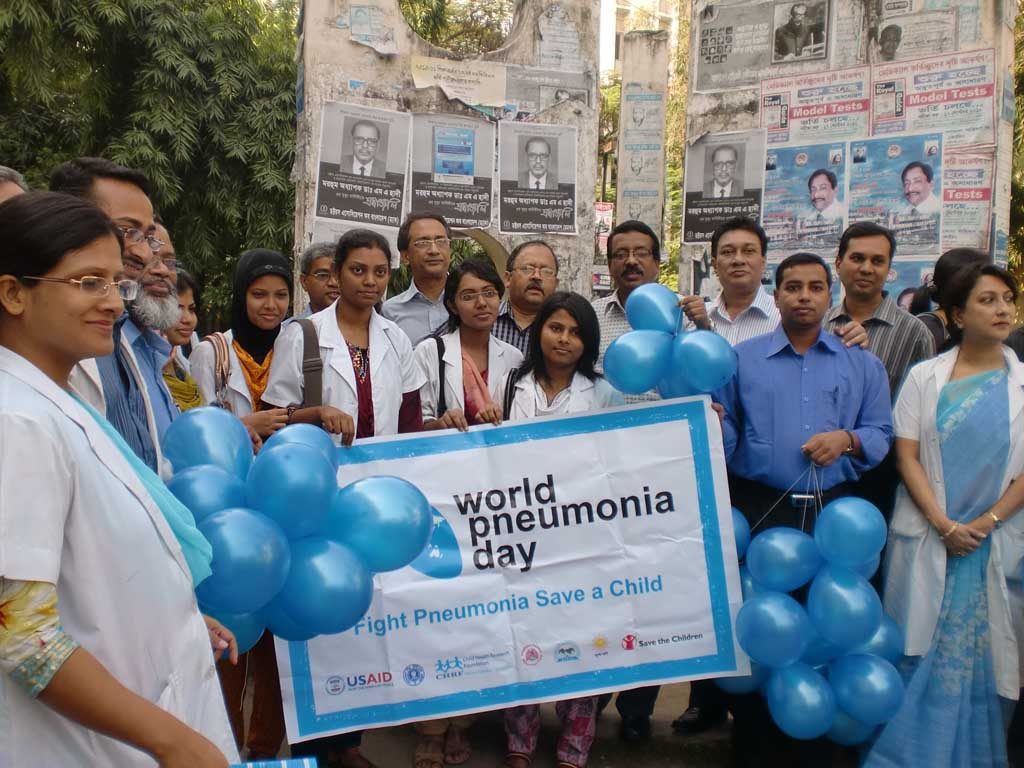 Pneumonia was claiming the lives of nearly 1.4 million children under 5 years of age, making it the leading infectious killer of children worldwide. However, most people were unaware of pneumonia’s toll and the disease was low on the list of global health priorities. To combat this lack of understanding, IVAC helped establish the Global Coalition against Child Pneumonia and the first World Pneumonia Day in November 2009 to bring this crisis to the forefront. Thousands of advocates—representing more than 140 organizations in over 40 countries—have joined the Global Coalition to bring awareness to and fight this disease. IVAC is a proud member of the Coalition and helps to coordinate the activities of World Pneumonia Day, observed each year on November 12.

Read a 6-year recap of progress from Dr. Orin Levine.

With India’s introduction of Hib vaccine in 2011, nearly every country in the world provides the life-saving vaccine to their children as part of the national immunization program.

Headquarted in the Johns Hopkins Bloomberg School of Public Health, the Hib Initiative helped many countries achieve this milestone. The Initiative used a combination of collecting and disseminating existing data, research and advocacy to help countries build a case for adopting the Hib vaccine. Learn more. 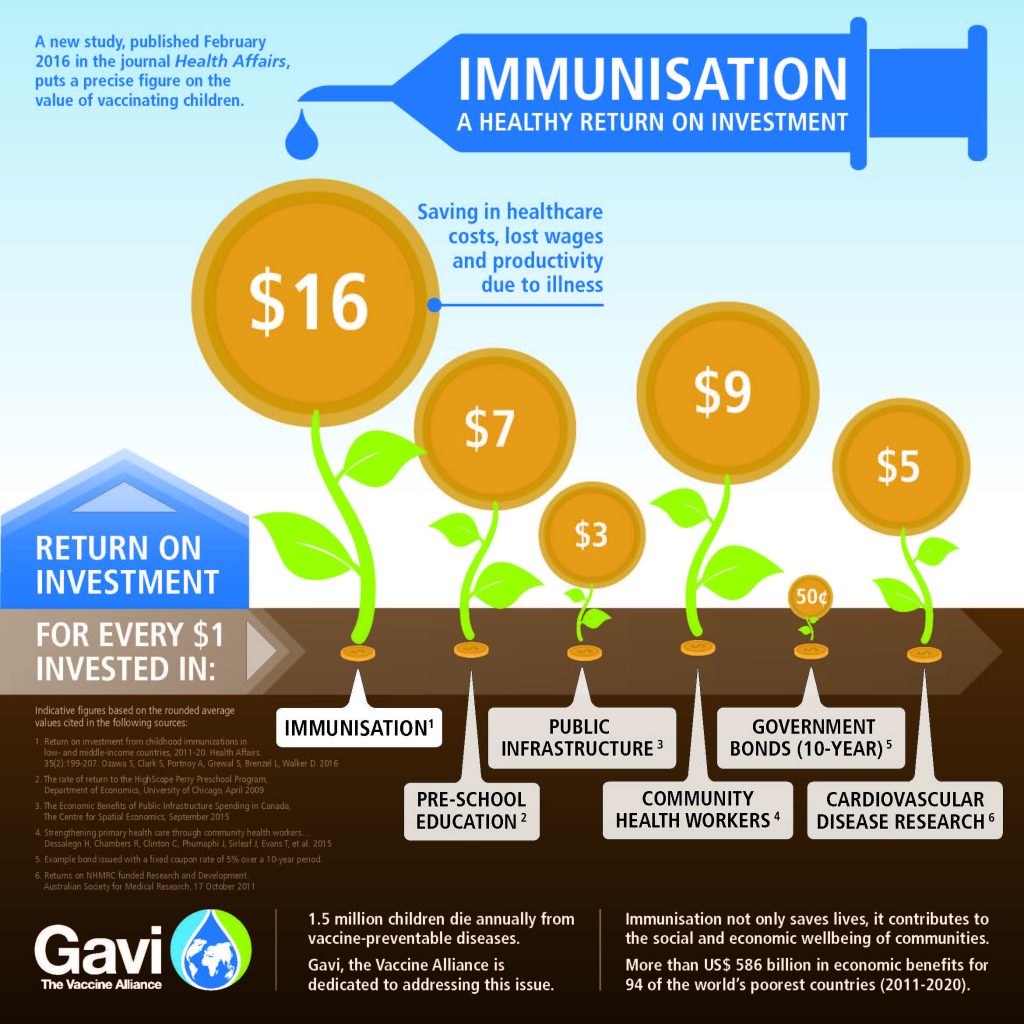 This landmark study, launched at IVAC and continuing here in its fourth phase, demonstrated that vaccines are an incredible investment even when compared with other major priorities, recouping $16 in the world’s 94 lowest-income countries for every $1 invested due to savings in healthcare costs, lost wages and productivity due to illness.

Read about DOVE IV’s work to understand the cost of vaccine-preventable disease.

An IVAC report found that India could prevent over 90,000 child deaths and save over 1 billion USD each year in economic benefits by scaling up coverage of immunization programs against pneumonia and diarrhea. In 2016, India became the first South/Southeast Asian country to introduce rotavirus vaccine into its national immunization program. Notably, India is introducing two indigenous vaccine products. In 2017, India introduced pneumococcal conjugate vaccines, which had previously been available only in the private market.