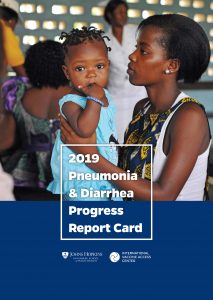 BALTIMORE, MD—A report card finds health systems are falling short of ensuring the world’s most vulnerable children have access to prevention and treatment services in the 23 countries that together account for 75% of global pneumonia and diarrhea deaths in children under five.

Globally, pneumonia and diarrhea led to nearly one of every four deaths in children under five years of age in 2017. Released on World Pneumonia Day, the 2019 Pneumonia & Diarrhea Progress Report Card by the International Vaccine Access Center (IVAC) at the Johns Hopkins Bloomberg School of Public Health describes progress in fighting pneumonia and diarrhea in countries with the highest absolute number of deaths and, for the first time, in countries with the highest rates of deaths from these illnesses.

This report analyzes how effectively countries are delivering 10 key interventions—including breastfeeding, vaccination, accessing appropriate health care providers, use of antibiotics, oral rehydration solution (ORS), and zinc supplementation—to help protect against, prevent, and treat pneumonia and diarrhea. These measures are proven to help prevent death due to these illnesses and could help achieve the UN’s Sustainable Development Goal target of reducing under-five mortality to at least as low as 25 per 1,000 live births by 2030.

Immunization scores ahead of treatment indicators

The Pneumonia and Diarrhea Progress Report, issued annually for a decade, finds as in past years that immunization coverage—the most frequently updated indicators in the report—generally makes up the highest scores. Use of exclusive breastfeeding continues to lag behind, as does access to treatment, particularly zinc supplements for diarrhea.

“It’s critical to prevent children from becoming ill and dying from pneumonia and diarrhea by ensuring universal coverage of immunization, so we are pleased to see higher scores for immunization across many countries,” said William Moss, MD, MPH, Executive Director of IVAC and Professor in the Departments of Epidemiology and International Health. “However, newer vaccines such as rotavirus and pneumococcal vaccines are not yet reaching most children in these 23 countries, and access to treatments such as basic antibiotics and oral rehydration therapy is surprisingly low across most of the countries included,” he said.

Sixteen out of 23 countries assessed failed to meet the targets for any of 10 interventions to protect against and treat pneumonia and diarrhea, as outlined in the World Health Organization and UNICEF’s Integrated Global Action Plan for the Prevention and Control of Pneumonia and Diarrhea (GAPPD). Three of the 23 countries met the 90% target coverage rate for at least four vaccines while one was able to attain 90% coverage for any of the four treatment measures. Across the board, data quality and availability issues continue to hinder efforts to understand remaining gaps and target investment and interventions. 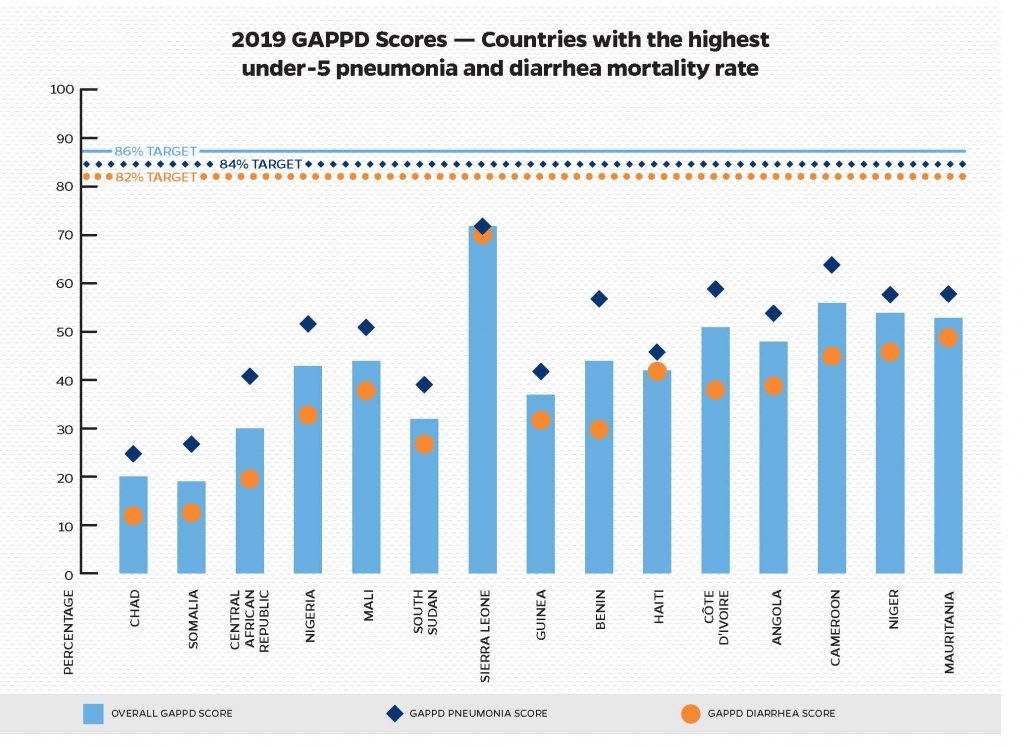 The report notes progress in Pakistan, which recently introduced rotavirus vaccine into its immunization program, as well as in Nigeria, Indonesia, Angola, and Côte d’Ivoire. Niger’s score dipped because of decreases in immunization coverage, although its coverage remained above other high-mortality countries, as many of them struggle with fragile governance, conflict, disease outbreaks, or natural disasters. 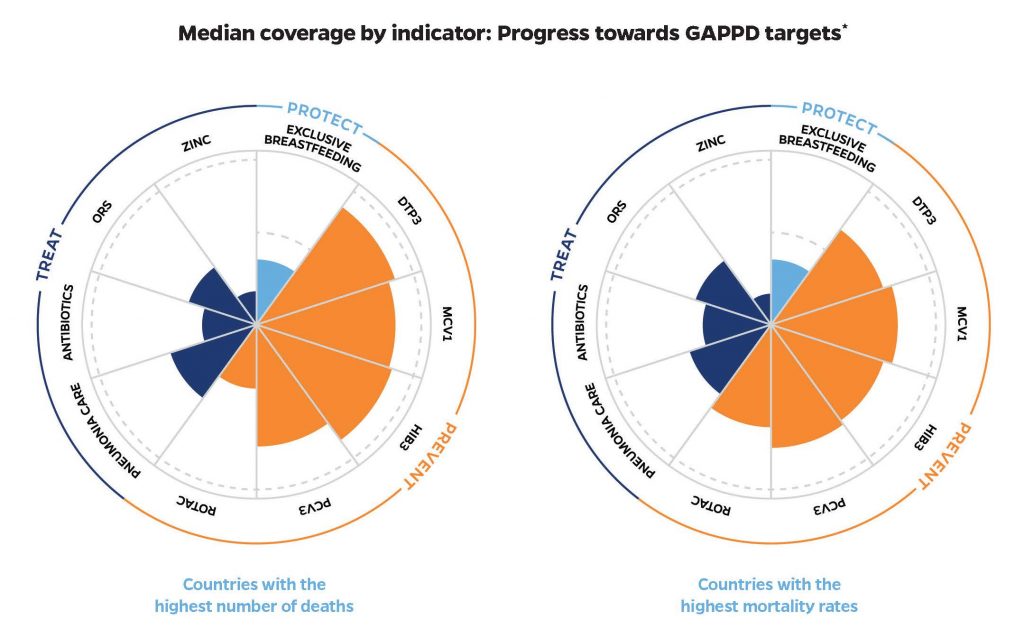 Progress in India—which due in large part to its population was home to more under-five pneumonia and diarrhea deaths than any other country in 2017—has been mixed. Rollouts of rotavirus vaccines, beginning in 2016, and pneumococcal conjugate vaccine, beginning in 2017, helped India’s scores improve. India’s exclusive breastfeeding rate, at 55%, is among the highest of the 23 countries. However, the proportion of children receiving important treatments as with many other countries remains below targets. Half of children with diarrhea receive ORS and 20% receive zinc. 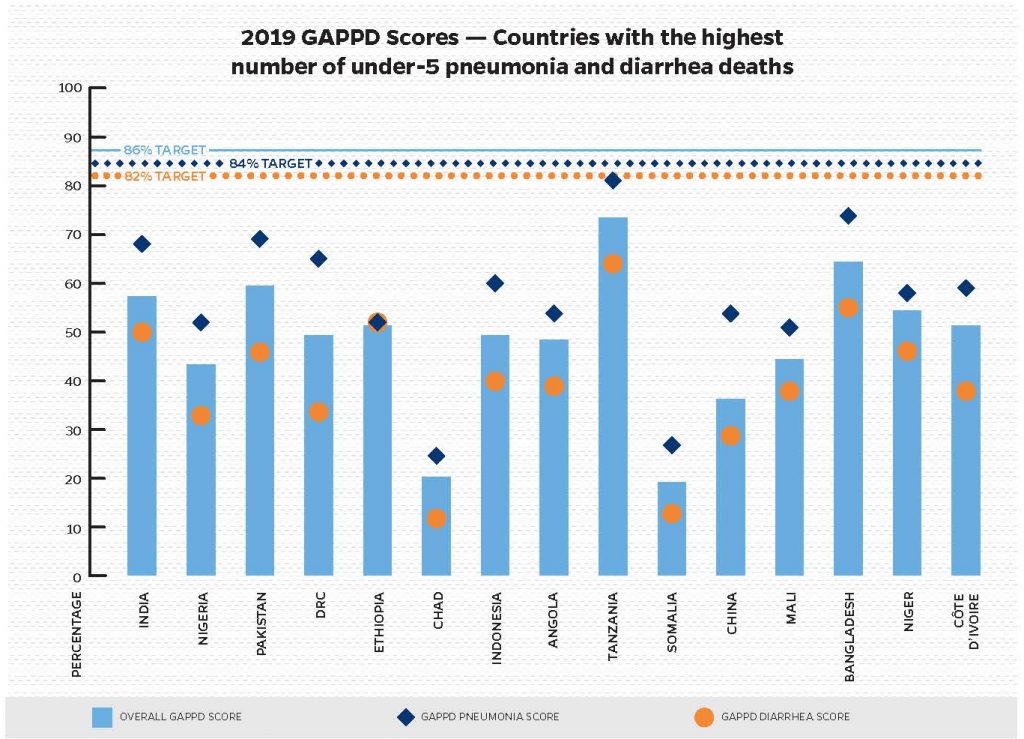 Only a few countries are positioned to meet targets by 2025

The report card concludes that progress continues slowly with only a few of the 23 countries in the analysis positioned to meet GAPPD targets by 2025. The global community must increase investment and support countries in developing smart, sustainable strategies that close gaps and accelerate progress.

Support for the report was provided by the Bill & Melinda Gates Foundation.