Respiratory syncytial virus (RSV) and other viruses now appear to be the main causes of severe childhood pneumonia in low- and middle-income countries, highlighting the need for vaccines against these pathogens, according to a study from a consortium of scientists from around the world led by the International Vaccine Access Center in the Johns Hopkins Bloomberg School of Public Health.

While much progress has been made to reduce childhood pneumonia, it remains the leading cause of death worldwide among children under 5 years old with about 900,000 fatalities and more than 100 million reported cases each year. This makes pneumonia a greater cause of childhood mortality than malaria, tuberculosis, HIV, Zika virus, and Ebola virus combined.

The main causes of pneumonia today are not the same as they were in past decades, in part due to successful vaccines against H. influenzae and pneumococcal disease. New estimates about what causes severe pneumonia are critical for decision makers involved in the fight against pneumonia.

The study, published June 27 in The Lancet, was the largest and most comprehensive of its kind since the 1980s. The Pneumonia Etiology Research for Child Health (PERCH) study included nearly 10,000 children in Bangladesh, The Gambia, Kenya, Mali, South Africa, Thailand, and Zambia.

After testing for viruses, bacteria, and fungi in children with severe hospitalized pneumonia—and in community children without pneumonia—the study found that 61% of severe pneumonia cases were caused by viruses led by RSV, which alone accounted for 31% of cases.

PERCH estimated that RSV accounted for nearly a third of all cases and was the leading cause of severe pneumonia in each of the seven countries studied. Other top causes were rhinovirus, human metapneumovirus, parainfluenza viruses, and S. pneumoniae bacteria. 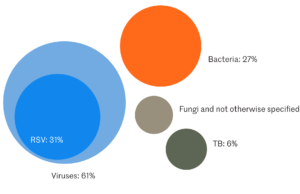 “We now have a much better idea of which new vaccines would have the most impact in terms of reducing illness and mortality from childhood pneumonia in these countries,” says Katherine O’Brien, MD, who led the PERCH study as a professor at the Johns Hopkins Bloomberg School of Public Health and now serves as Director of Immunizations, Vaccines and Biologicals at the World Health Organization.

PERCH will impact how we prevent, diagnose, and treat pneumonia in the 21st century

RSV has long been known as a common and potentially serious respiratory germ among children and the elderly. Several RSV vaccine candidates are being developed and evaluated in clinical trials. A monoclonal antibody therapy, palivizumab, is available for the prevention of RSV disease in children with underlying medical conditions but is not suitable programmatically or financially for widespread use in routine immunization programs. 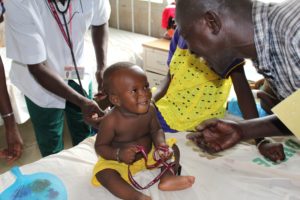 Bacteria, cumulatively, caused a substantial proportion of disease and, being treatable and commonly fatal, should remain a target for early access to treatment.

Yet with PERCH results showing that viral causes predominate and with the development of new tools to help identify the causes of pneumonia, treatment standards may be revised to tailor therapy and reduce unnecessary antibiotic use.

“Prior to this study, we didn’t know which specific viruses and bacteria are now causing most of the severe childhood pneumonia cases in the world, but public health organizations and vaccine manufacturers really need that information to work toward reducing the substantial childhood mortality that pneumonia still causes,” says study co-principal investigator Maria Deloria Knoll, PhD, a senior scientist in the Bloomberg School’s Department of International Health, and associate director of science at the Johns Hopkins International Vaccine Access Center (IVAC).

Identifying the germs that cause pneumonia is difficult in individual cases and much more so on a scale of thousands of cases, especially in low- and middle-income countries where most  pneumonia deaths occur. PERCH developed a new analytic tool to combine evidence from multiple test results to estimate the causes of pneumonia. The analytical technique is called the Bayesian Analysis Kit for Etiology Research (BAKER), and is available online as an open-source application for use by other public health researchers.

Many institutions worked together to standardize protocols and and train hundreds of laboratory technicians, nurses, and other health workers who developed cutting-edge skills.

Read the PERCH results in The Lancet: Causes of severe pneumonia requiring hospital admission in children without HIV infection from Africa and Asia: the PERCH multi-country case-control study