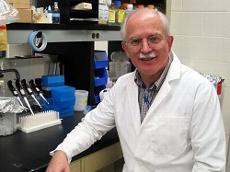 A key step in mouse fertilization is the tight binding of sperm to glycans on zona pellucida glycoprotein-3 (ZP3), one of the three glycoproteins in the egg's extracellular coat. The goals of our studies are to identify the glycans on ZP3 which bind the sperm and to isolate and characterize their cognate sperm-surface receptors. To this end, we have used glycans of known structures as inhibitors of the binding of sperm both to eggs and to purified ZP3. Additionally, we have tested the abilities of these glycans, when covalently attached on BSA, to mimic ZP3's ability to induce the sperm to undergo the acrosome-reaction. We have shown that the Lewis X trisaccharide, Galb1,4[Fuca1,3]GlcNAc, binds the ZP3 receptor on sperm and mimics the ability of ZP3 to induce the acrosome-reaction. The aims of current studies are to identify the sperm surface receptors that bind the Lewis X glycan, to identify the signal transduction pathways coupled to these receptors and to test the hypothesis that the Lewis X glycan, or a glycan with related structure, is present on ZP3.