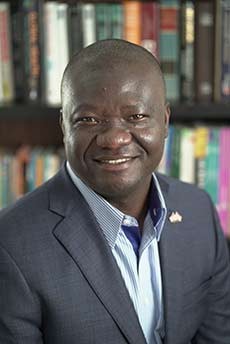 My current research focuses on Ebola vaccines, detection of persistent Ebola virus in survivors, and transmission dynamics for emerging infectious diseases, especially using One Health (OH) approach. I was named winner of the Bloomberg Hopkins Emerging Leader Award, 2016. In honor of the Johns Hopkins Bloomberg School of Public Health’s Centennial. Award was established by Bloomberg Philanthropies to recognize a Bloomberg School student or alumni with the potential to impact public health on a large scale for years to come.

I have been recognized as public health leader both at home and internationally as a leader in Liberia’s successful response to the 2014 Ebola outbreak, I have made an enormous impact on public health in disease control programming in West Africa.

A lawyer by training. My work as a public health leader first public health leadership role with the National Malaria Control Program in Liberia, a program that helped to reduce malaria prevalence from 66% in 2005 to 28% in 2011. I became Assistant Minister of Health and Deputy Chief Medical Officer for Prevention in 2012-2015, Deputy Minister of Health for Disease Surveillance and Epidemic Control 2015-2017. The position recognizes my role in bringing an end to the worst Ebola epidemic ever known and my leadership of the incident management system that quickly detected and contained the outbreak. Throughout my career I have consistently demonstrated analytical excellence and strong leadership, notably through effective communication and skilled team building. My leadership has saved thousands of lives in Liberia preventing the Global spread of Ebola. Being a visionary, I led the establishment of Liberia's First National Public Health Institute after the Ebola crisis and became its First Director General and Chief Executive Officer (CEO) 2017-2019. The National Public Health Institute of Liberia as a center of excellence to prevent, detect and respond to public health threats in Liberia and West Africa.

Medal of Excellence for Public Health Services, the Surgeon General of the United States

Certificate of Award in Memory of the German Bundeswehr, Humanitarian AID for Western