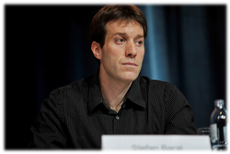 Stefan Baral is a physician epidemiologist and an Associate Professor in the Department of Epidemiology at the Johns Hopkins School of Public Health (JHSPH).  Stefan completed his certification in Community Medicine as a Fellow of the Royal College of Physicians and Surgeons of Canada and Family medicine with the Canadian Council of Family Physicians.

Stefan has also been involved in HIV epidemiology, prevention, and implementation research focused on the epidemiology, human rights contexts, and effective interventions for gay men and other men who have sex with men, transgender women, and female sex workers across Western and Central, and Southern Africa and parts of Asia with support from USAID, CDC, NIH, amfAR, and the Global Fund.  In addition, Stefan has led or supported the implementation and evaluation of HIV prevention studies globally characterizing effective combination HIV prevention packages for key populations across multiple low and income countries.  Stefan acts as the Director of the Key Populations Program for the Center for Public Health and Human Rights at the JHSPH

2018 Research Contributions to Health in Senegal, Ministry of Health, Senegal

See all publications by Stefan Baral