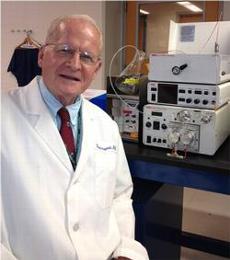 My career has been in the field of cardiopulmonary physiology, specifically cardiopulmonary control. I began by studying the ventilatory response to carotid body stimulation caused by hypercapnic or hypoxic blood. I am still studying the carotid body, but the dependent variable has changed from the ventilatory response to neural activity. And the independent variable has changed from hypoxic blood to hypoxic solutions of various compositions. I am trying to define the role of acetylcholine. It is an essential excitatory neurotransmitter in the carotid body's transduction of hypoxia, hypercapnia, and acidosis into a neural signal. In addition to the use of pharmacological agents to block the release of acetylcholine or the cholinergic receptors, I am currently measuring the release of acetylcholine from the carotid body with HPLC. This measurement has never been made before to my knowledge; carotid body content has, but not release. I am also using immunocytochemical techniques to locate neuronal nicotinic and muscarinic receptors in the carotid body. Finally we have measured the impact of acetylcholine on dissociated glomus cells, the putative chemotransducing cell, with the use of patch clamp techniques and with the measurement of intracellular calcium. Experiments have shown that resting membrane potenial was reduced and intracellular calcium in these cells increased with the application of acetylcholine. This is a very exciting observation. I have also studied the reflex effects of carotid body stimulation on static lung volumes, and during systemic hypoxia on pulmonary vascular resistance, and regional vascular resistances in the brain, heart, liver, kidney, spleen, stomach, large and small intestine, pancreas, adrenal glands, some skeletal muscles, and the eye. And I have two studies on the reflex response of ACTH and adrenal cortical hormones to hypoxic peripheral arterial chemoreceptor stimulation. Of greatest current interest is the spleen since it is the only organ besides the lung which shows an increase is vascular resistance in response to local hypoxia. I do not believe it is a much-studied organ. It might be helpful to do so in order, possibly, to gain some new insights into the much-studied hypoxic pulmonary vasoconstrictor response which is still something of a mystery.I have done a fair amount of work at the other end of the cardiopulmonary control system, on the principal muscle of respiration -- the diaphragm. I have tried to find out what the direct effect of various forms of acid-base imbalance were on the diaphragm. Mechanically it reduces the force of its twitch and tetanic contractions. But why? Most people used to say, "Oh it's a pH effect!" This does not say very much. In part the statement is true; but only in part. The accumulation of inorganic phosphate is also important, as is the effect on intracellular calcium. Curiously, we found that the greatest reduction in mechanical force came during compensated metabolic acidosis (low HCO3- + low PCO2 = normal pH). This condition in the resting diaphragm rendered the intracellular pH (measured with 31P NMR) normal or even a little alkaline. I have not worked in this field in some time. But I do not believe the answer to the question has been found. To do so would seem to have significant clinical relevance for patients who have chronic obstructive lung disease since they are frequently chronically hypercapnic, even though this is compensated. Several pieces of literature show that their diaphragmatic performance is compromised. It remains a question of considerable interest to me.